MeCoSa is a mentoring and coaching program in Saxony-Anhalt that provides women with targeted and strategic support on their career paths. This is achieved through the project modules: mentoring, coaching, workshops and networking. New additions were the courses module, which was designed to make participants more self-confident, and the addition of English-language offerings (primarily workshops and coaching).

The project team designed a complementary offering for 286 female participants in the period from May 2019 to December 2021. The modules were freely selectable and could thus be put together individually for each participant.

During the project period, 44 mentees were accompanied in the "Mentoring" module by a qualified trainer and project employee Jana Haselhorst in their search for a suitable mentor.

A total of 42 coachees participated in group coaching in 6 groups in Magdeburg and Halle, and 60 coachees took advantage of individual coaching with the help of project assistant Sandra Schinkel. Together, this amounts to 215 appointments in the coaching contigent, which was covered by 10 qualified coaches.

There were also 52 workshops on 13 key topics that are important for career paths in science and/or business, 5 empowerment courses and 14 networking events.

The project was coordinated by Maria Rosenbaum.

MeCoSa is a project of the Coordination Office Gender Research & Equal Opportunities Saxony-Anhalt (KGC) and is funded by the European Social Fund.

Unfortunately there are no offers at the moment.

Network with us through the MeCoSa groups in: 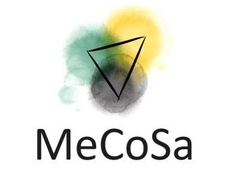 Do you want to participate in MeCoSa? - then contact us by mail or phone or just drop by our office in person. We will then discuss everything else.

Just for your information: Participation requires the completion and signature of 5 forms, which we need from you within the framework of the support by the European Social Fund. With your signatures, the entire MeCoSa offer is free of charge for you.

This project aims to facilitate career planning and entry into the profession of young female scientists. Highly qualified young women are to be prepared for their future leading positions in science and/or industry. Through individual support, supervision, and advice provided by a mentor, the women acquire the skills to actively shape their careers. Regarding coaching, the focus is on developing potential.
There are still too few women at individual career levels or in specific subjects, on committees, and in management positions in the scientific community. MeCoSa would like to contribute to sustainably supporting and promoting the participation of women at all levels of the university and thus gender equality in science.

The competition is open to female students, young female scientists, and graduates, primarily from the STEM areas of the colleges and universities in Sachsen-Anhalt.

You are not quite sure if you belong to the target group? - just contact us, we will help you.

Registration and all events offered within the framework of MeCoSa are free of charge for participants.

Also, travel expenses for MeCoSa events at other university locations in Sachsen-Anhalt can be settled through the project.

Childcare costs that would be incurred to take advantage of a MeCoSa offer can also be claimed through the project.

More detailed information is available from the project team on request.